So the first phase of the fireplace project is officially complete. Last week, I ran out of cement backer board and ended up buying a second sheet this week. I also removed the floor tiles on the sides and left it bare (eventually, before flooring, I’ll make sure it is level enough.

I left the slate in the hearth area as you can see below.

What I’m planning on doing is now instead of using Joint Compound to give that part of the wall a smooth finish, I’m going to be using a cement product. I got the idea from this site (there were some more cement type ideas too) and had contemplated doing the same thing but thought the JC would do the same job.

I ended up changing my mind because of the heat factor from the fireplace. It won’t get uber hot to melt the joint compound, at least I don’t think it would but still, since I opted for cement backer board, I thought using this Ardex stuff was the way to go. So yeah, I just placed an order for some Ardex SD-M on Friday. I’m getting the white cement and figured I could add a little bit of my Benjamin Moore Flora paint to it.

Here is another link that inspired me to use Ardex. This is from YouTube. http://www.youtube.com/watch?v=30LxxLdAkzA.

If you’re wondering about the slate that forms the hearth, my plan is to use that cement micro topping over it so it creates one uniform piece. If it works, it will be awesome because then I won’t have to worry about buying and laying tile. 🙂

The stuff should come in before next weekend so I’ll update more then.

The final piece will be the zinc. If all goes well, I should have a new fireplace before the end of July. 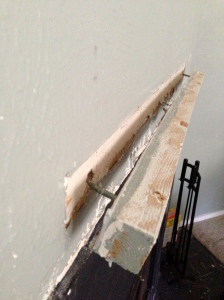 Oops, I busted some of the cement board. 😦

So I started the fireplace refresh this afternoon. Before starting though, I took a pic to show the before.

The first thing I did was remove the mantle. The wood screws in my hand were HUGE but there were also some bolts attached to the piece of wood that held the mantle. I was happy that I didn’t need to cut through them in order to remove.

Next, I took my wood chisel (I need an actual pry bar) and carefully pried the tile off. (It’s black slate that I’ll be taking to the Habitat Re-Store sometime in the next week or two) I managed to only break 3 tiles but chipped a few.

Oh, as I pried off the tiles, I kept spraying with bug spray. There were some creepy crawlies so I made sure I took care of them.

I don’t know if you could see, I tore off some of the cement backer board or its equivalent. So it was off to Lowes I for a sheet.

I had to stop midway through attaching the backerboard. I was getting tired and hungry. I’ll use the rest of the board to attach so that I can minimize the joint compound I’ll be using to smooth out the wall.

It’s currently in my spare room as I flatten it out if the shipping roll.

I also tried to cut them with some shears my coworker let me borrow. Um, yeah I managed to break into a sweat as I cut a small strip out. I need one of these shears. Some of the prices for shears were crazy expensive.

My storage cubes/ottomans are covered :).

To make them into ottomans, I used a 2 inch foam square that was attached to a piece of plywood cut to size.

I started on the lids Saturday and fixed the corners on Sunday so they were a little neater. As you can see, Floyd approved.

Then on Sunday night I used batting to cover one of the cubes. I had intended to keep the hand holes but during the upholstering process, it became a difficult task.

For some reason, on the first cube I did, I cut each piece so there were 4 separate sides. That was stupid and I ended up using far more staples than I should have.

So I was trying to figure out how to hide the cut ends today and realized I had some hemming tape. I made fabric “ribbons” (I don’t speak fabric) and then used more tape to adhere them on the seams.

Then I ran out of said tape and ran to the fabric store for more. At this point I wanted to be done working with canvas. Yeah that was a thick fabric to work with but it’s durable.

The second cube took less time and I used one piece for the sides. For the seam I just used one of those ribbon thingies to hide the staples.

They are now basically done. I do need to finish the edges with some sort of ribbon (actual ribbon) or something (maybe in coral?).

Then for the bottom, I want to get some of that black fabric that you see underneath furniture. Once I get floors done, I’ll put little felt pads under as well.

For the handles, I will use the fabric and stitch them on. I can do very basic stuff like that. 🙂 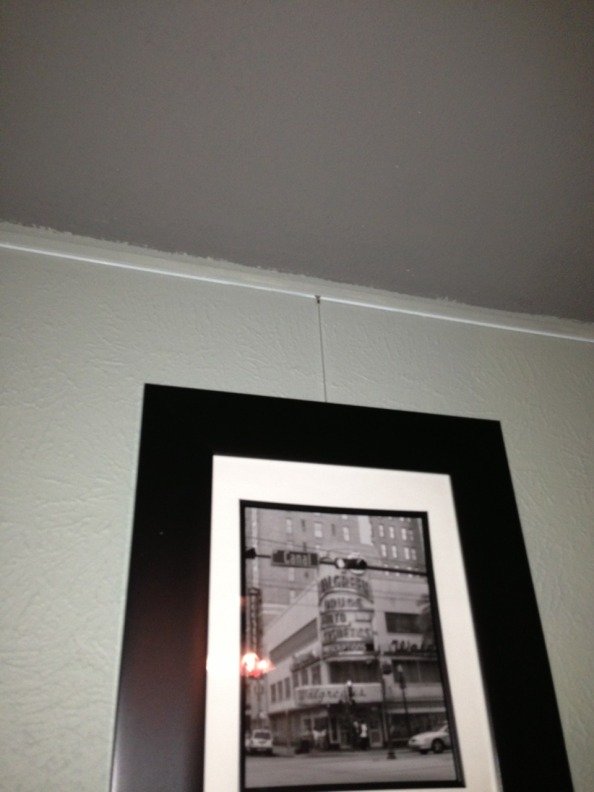 To make up for my ineptitude with fabric and the staple gun, I hung my picture rail system in the living room.

I’ve for another piece for the dining room and any leftovers will go in my office. 🙂

This will work better than the holes I’ve put on the walls.

I’m not done still need to do the sides but here is a quick peek at my new ottomans.

Things I learned so far –

I’ve been coming up with ideas that would update the fireplace and posted a lot of ideas. I think I’ve come up with the best idea that isn’t too costly either.

When I started really doing research on updating “the memorial”, I saw ideas similar to this. For me to actually reface it with new doors, louvers, etc, it probably would have been spendy (several hundred upwards to the thousand dollar range). That wasn’t including tile or anything.

While looking at ideas for a fireplace mantel, as I mentioned earlier, I realized the idea of using a barn beam or a reclaimed beam, wasn’t going to fit the style I was going for (the concrete-ish textured wall). So last night I started to look for metal mantels.

Somehow I started to look at making my own with either copper or zinc. Copper wouldn’t work because of the colors but it is a beautiful metal. Plus, it looks like it wouldn’t require a lot of special tools to work with as you can see from this website.

Zinc is pretty cool and can be patinated. (learned that word today) It also looks as though it can be sanded out if the look isn’t what you’re expecting and start over.  Below is a 2 part video on some different techniques.

It looks so damn cool and because it is light, I wouldn’t need a whole lot of special fasteners.

After posting my last entry updating my planning progress, I came up with the idea of creating a frame using zinc-wrapped plywood attached onto the fireplace (Top Pic). I was planning on using high-heat flat black on the existing metal frame but now I could add some oomph by having a patina zinc frame.

So what about the mantel? I am going to go without. As one of my coworkers said, having a mantel with this metal work would detract from the actual piece. Plus, with my pipe shelving, I’d have plenty of room for knick-nacks.

Just to play it up even more, the 2nd pic shows an artsy addition to the frame. It would be a thin (maybe 3/8”) zinc wrapped plywood that would float over the frame. I’ll end up using spacers and maybe a different cupric sulfate (CuSO4 for you chemistry geeks) application.

This would mean the only part that would be tiled would be the hearth and now with the metal framing, I’d be going with a simpler design for the floor. Nothing that would detract from the beauty of the metal.

So yeah, this would still require some work and patience but I feel like I’m getting something I would really LOVE instead of settling for something better than what I currently have.

If I can get less than perfect Zinc sheets (they have scuff marks or dings which would add character to the pieces), I’d save money on the whole design.