So last week I blogged about how I installed the Wink Hub to the house and how it was a pretty easy system to set up. I must have jinxed myself because that very night, my system went offline for a few hours (even though my internet connection was working fine). Once it was working again, it just wasn’t the same—the lights I had set up on a schedule no longer came on and when I tried to fix it, it wouldn’t work.

I ended up getting the Samsung Smartthings Hub. Originally, this was my top choice but it wasn’t available when I was ordering (and I was under a time constraint).

This seems to be a much better product, but it isn’t necessarily a plug and play item which was how the Wink had appeared to be. Unlike the other product where I was able to pick the hub close to the switch to have it connect, this new product required a thought process (more on that below).

All my smart products I’ve bought used Z Wave technology (language? protocol?) and were both Wink and Smartthings compatible. They were all available at the two big box stores so that was how I ended up with this small network of things. 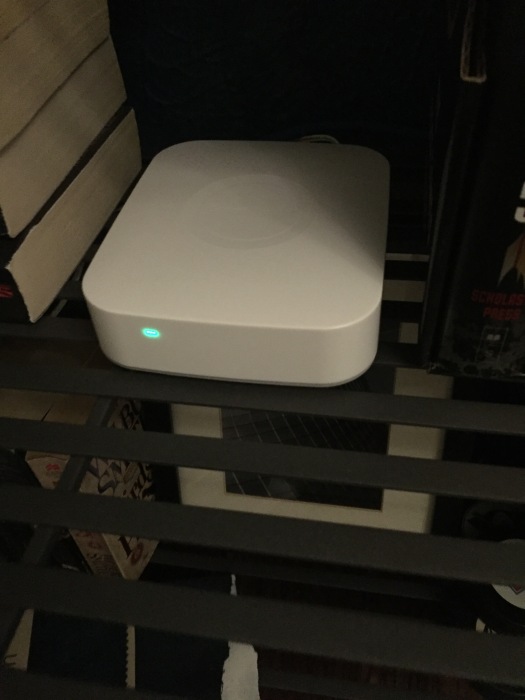 This hub itself had to be tethered to my router so I couldn’t move it around like the other one. This led to me initially only connecting two items but my other ones weren’t working. It was also probably due to the fact that they had been connected to the Wink hub prior and needed to be reset.

I tried to connect more items by using a 25′ Cat 5 cable to get the hub closer to the switches but it was to no avail and actually packed it up with the intent to return it back to Amazon. (I also tried to get the Wink going back again but absolutely NOTHING worked this time around so it got returned today.)

I decided to do some research because I knew not everybody had Cat-5 wired throughout their homes so there had to be some solution out there. As it turned out, there was. The technology I chose (Z Wave) can be visualized as a “mesh” type of coverage. If I pictured where I had my connections (one on one side of the house and the other was across the way), there were obvious bare spots here I didn’t have coverage. The further I moved away from the hub without some sort of switch or outlet (to repeat or extend the signal), the less effective it was.

It was also recommended that I start connecting the closest items to the hub first and then the farther ones later, which made sense. It wasn’t just for this controller; it was for Z Wave items. (even with another product like a new Wink or Vera Edge–which I had also considered), it was best to do the same thing. I bought a switch for a ceiling fan and then one plug in switch for my laptop which helped to expand the coverage. I’m still down to 2 light switches but I’m hopeful that I can get them to connect.