Before my office renovation, I had a metal file cabinet. It did its job but nothing really cool about it.

I needed something that would look cool or funky as well. I had thought about a storage ottoman but with a couple miniature jungle cats (in their minds), the fabric had to be right.

Then the idea came around the holidays during one of my movie marathons – an old trunk – maybe something that looked like it passed through Platform 9 3/4 a few times.

Just last week I found one at a salvage place.

It was pretty filthy and the leather handles were broken and disintegrating. The inside smelled (and still does) of moth balls.

After a little bit of TLC and a set of caster wheels, it’s now ready to start earning its keep.

So I’ve been looking off an on at cat trees for Floyd and Puck but have never found anything from the big box stores that caught my eye. Most of them are expensive but made not to last.

I got some cool ideas after looking online. There were driftwood trees made in Canada that looked really cool and then there was a juniper tree company that made some cool looking stuff with the twisty wood. So then I thought about making one on my own but juniper isn’t really a native tree here in Austin.

I thought of mesquite but that wood is too hard and figured that would make it more difficult to work with (especially since I’m not really a carpenter). Then I found a guy in Oregon that sells it and can ship it. It was more than I really wanted to spend but I ended up buying some branches but I figured I’d get 2 trees out of it. They arrived on Tuesday and I began to work on it Friday.

The first thing was to find a base. I had an end table top I saw on the curb and was going to use it but realized my design would span out and therefore this particular base wouldn’t be sturdy enough. So Friday morning, I trekked over to the Habitat Restore and found a piece that was a counter top.

Yep $3. Couldn’t go wrong there. I bought 10 inch bolts to make sure the branches were sturdy.

The problem was, the bolts were too flimsy and I should have stuck to lag screws instead. My impact driver drill had to go through several battery swaps and smelled like the motor was going to burn. 😦 Nope, not good.

My friend Mike stopped by on Friday and managed to get one bolt all the way in but the other one broke off. He suggested lag screws so I ended up back at the hardware store and bought them like I should have in the first place. (DOH!) I didn’t get 10 inch ones but 6 inch and they seem to hold up.

Saturday – woke up early and started to work on securing the first branch (yeah, spent all day Friday and couldn’t even get it fully secured). Managed to get 2 lag screws on in less than an hour using a ratchet. 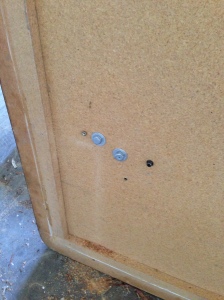 Then had to find a second piece that would work and then go about in securing the thing down. Got that done before noon. 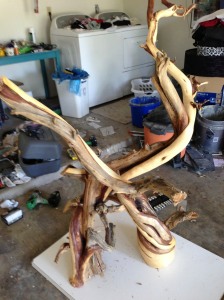 I went to grab some lag bolts to secure the third piece and grabbed some lunch. It took a while to figure out how to place the third branch so it could hold perches for the cats but I finally got it to work.

I was going to break and get a massage but lo and behold, my garage door wasn’t working and was actually hanging crooked. So I called an emergency service to come out since I couldn’t lower it to the ground, it just hung half way. While the guy worked on the door, I worked on the cat tree and managed to get it done and ready for an oil sealer (which I pretty much just slapped on – I’ll probably use butcher block oil or wax for upkeep in the future).

So Sunday is normally my run day but I was sore and had a bazillion bug bites from working in the garage. I decided to skip my run and go straight to finishing the tree by adding some cheap carpet and adding the perches. I probably should have installed the carpet BEFORE I attached the branches because the carpet is pieced in – like Frankenstein… not really impressive.

I got it to a stage where I could bring it into the house, and that was an adventure in itself. I had to maneuver it around but ended up removing the top branch in order to squeeze it through the front door. I’m sure it was a sight to see. Added carpet to some MDF boards I got for free at one of the big box stores in their lumber scrap bin. (YAY for Free!). Some of the boards, I painted the underside a turquoise blue just for some pizzaz. 🙂

Once I got the perches up, Floyd and Puck inspected it. 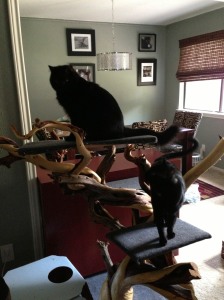 I ended up adding some sisal rope for them and Puck decided to demonstrate how to play with said rope.

(You might be able to see  how the bottom carpet is pieced together – I’ve got a turquoise, fluffy blanket on the bottom now to hide it.)

Puck likes the tree and Floyd is slowly warming up to it. 🙂

The second one won’t be as elaborate and will only have 2 branches.

I will be starting my popcorn project tomorrow.

At the same time I’m scraping that stuff off, I’ll be finishing up on spray painting the ceiling fan.

Also, since my Expedit units are detached from the wall, I’m going to be beginning the pipe shelving idea. I even have a list of plumbing supplies I’ll be buying tomorrow when I go to grab paint.

While I’m not starting it this weekend, I am still looking at fabric. I actually went to fabric stores today and looked/touched different materials. Sadly, I think all the cute stuff I had been drooling over won’t work. I need a canvas type material for durability and be Floyd and Puck resistant.

It wasn’t exactly what I was initially looking for…a coral & teal print, I love the design. It’s modern and retro at the same time. PLUS, the price isn’t right. Hopefully they’ll have enough for me to buy.

Okay, that’s all for now. I’ll be blogging the progress this weekend. 🙂

I have a couple Ikea Expedit units like the second pic and was going to line the entire wall with it. Then I saw the MCM look with the pipe fittings.

I think I can use my Expedits and have them supported on metal pipes and have them under my wide screen and then have pipe shelving around it. This way, I can build it as I go.

I think this will give a more modern twist to the classic Mid-Century Modern look.

I’ll try to use reclaimed materials as much as I can too.

On a whim I decided to do some furniture DIY. BUT I didn’t want to buy brand new stuff. I found an ad on Craigslist and got the dresser.

The original idea was to paint the top a dark sooty grey (some Valspar stuff I had in the garage) and then the rest in Benjamin Moore Pewter. Once done, I’d go over with some silvery glaze.

Well, I didn’t like it after the glaze was added. I had just enough of the darker grey to run a sponge roller through all the Pewter areas and in the process, the glaze mixed together giving it a dark grey metallic look. Final bling – the glass knobs from World Market.

It looks good though I will probably need to move it around in the closet eventually and shorten the lower shelves to accommodate longer dresses and stuff.